THE ORNAMENT OF CYCLADES

Ios island is without any dubbed, one of the most iconic places in Cyclades. Located in the middle of the complex, Ios is reachable quite easily by ferry. Our main town called Chora, with its famous hill and churches on top, has been named “the ornament of Cyclades”.
This unofficial name was and is inspired by thousands of visitors from around the world. Ios island for many years was known as the island for youngsters, with vibrant night life. Today, this is changing as we are visited more and more often by tourists of higher status.

Beaches on Ios island are more than you can visit in one trip. All over the coastline, there are many sandy paradise beaches or hidden jewels between rocks and bays. Most of them are reachable by car, but there are few accessible only by boat. The most famous beaches of Ios island are situated on the west coast. Mylopotas, Manganari and Yialos are the most popular.
read more 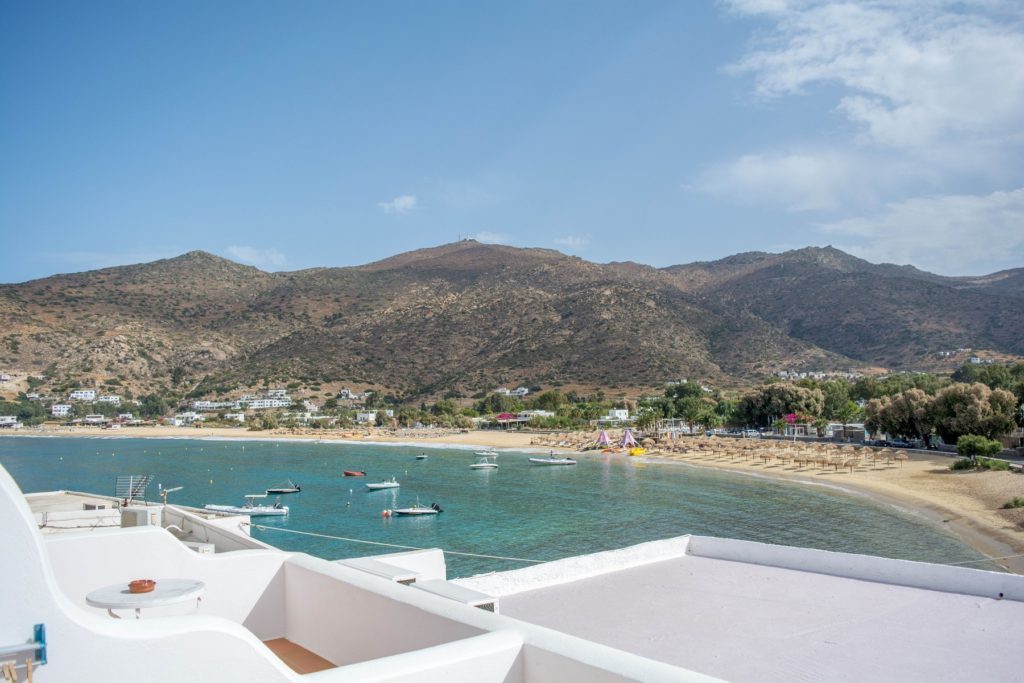 This is a place to be. Cosmopolitan beach very well organized fulfilling all the expectations of every visitor of Ios island. Water sports centres, beach bars, sundecks, volleyball court etc. are at your disposal.

As the area of Mylopotas has very well developed tourism infrastructure, you can spend here all day. There are many taverns, restaurants and snack bars here, so you can enjoy a bite with a sea view. During the sunset, Mylopotas takes on a different charm. The beach is more quiet, the sky is full with different colors that reflect from the sea, the summer breeze is getting more refresing…
Ios main town is not very far, with a good bus connection. Therefore, after your experience on Mylopotas beach, you can take an evening walk among the alleys of the island’s capital.
read more

AFTER THE SUN GOES DOWN ON IOS ISLAND

This is a place to be. Cosmopolitan beach very well organized fulfilling all the expectations of every visitor of Ios island. Water sports centres, beach bars, sundecks, volleyball court etc. are at your disposal.

You will not miss anything here. There are so many places and choices, that you will definitely return to your hotel satisfied. No matter which type of music you like, you will find something interesting. Another positive matter is that you can change places as many times you like, as everything is close to each other.
read more 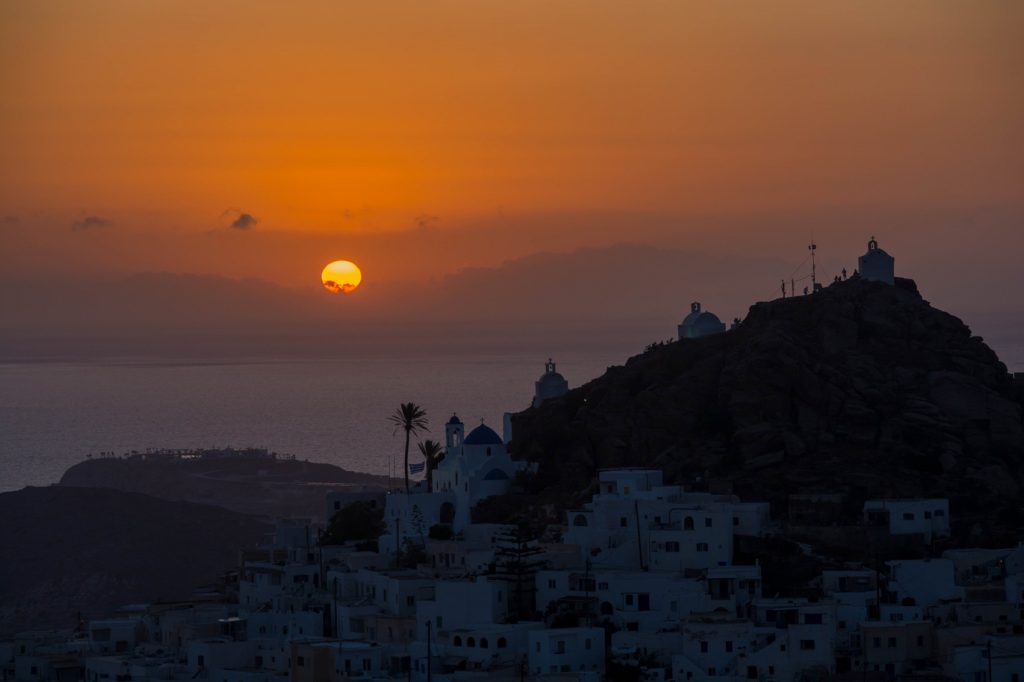 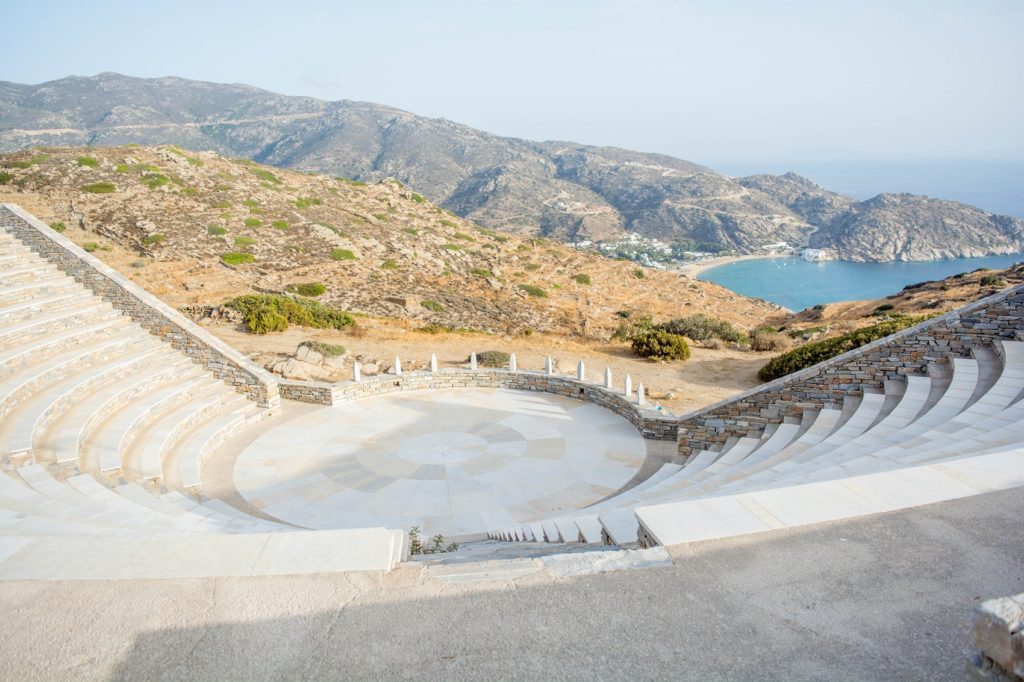 Ios has been inhabited since the early Cycladic period, as proved by the archaeological excavations which brought to light various findings. These mark the existence of human life on the island during ancient years.

The well-preserved remains of the walls of a castle and vessels, discovered at the west and north entrances of Chora, testify about the existence of a flourishing community. They also prove that the castle was inhabited since archaic period. Various findings show that the history of Ios starts from the Prehistoric times. The island was originally inhabited by Careans, Pelageans, Achaeans and Phoenicians. In 1050 BC, the Ionians settled down in Ios. Various suppositions have been made about the origin of the name Ios. The most predominant and credible of all is that the island took its name from the Ionians. A second version supports that Ios owes its name to the many violets (“ion” in ancient Greek) that bloom on the island each spring.

Inscriptions, coins and some texts from ancient historians, among which Herodotus, testify that Ios is the birthplace of the mother (Klymeni) of the Greek epic poet Homer and in fact the great poet was buried there. This belief has become a great myth and an ancient site on the island side of the island is believed to be the tomb of Homer.
Excavations on the island, on the region of Psathi, have unearthed the remains of an ancient temple. A short distance away, there is a ruined aqueduct from the Hellenistic times. Ios established a democratic political system during the Classical period, when it became a member of the Athenian Delian League. In 338 BC, Ios came under Macedonian rule until 315 BC when it regained its independence. In the 2nd century BC, Ios came under Roman authority. The Romans were using the island as a place of exile, in the same way as the other Greek islands. Many churches were built during the Byzantine period in Ios, using the columns and marbles of the ancient temples.

During the years following the fall of the Byzantine Empire, Ios, like most of the Greek islands, suffered from many pirate raids and the inhabitants would hide in the fortified castle to escape from the savagery of the pirates. In 1204, the island was occupied by Crusaders and came under the authority of the Venetian family of Crispi in the 15th century. Ios became part of the Duchy of Naxos and the Crispi rebuilt a new castle on the ruins of the old one for a better protection against the fearsome pirates. That didn’t stop the famous pirate Barbarossa from occupying Naxos in 1537 as well as almost all of the Greek islands.
The following years were very difficult for Ios, facing the constant attacks from the pirates and the Turkish fleet. During the Greek War of Independence against the Turkish domination, Ios took part in the Revolution, offering 24 well- equipped ships. The island finally gained its autonomy in 1829 and became a part of the Modern Greek State. The history of Ios very much resembles the historical events of the rest of the Cycladic islands.
In the Modern Greek state Ios island remained a barren island whereas its low-numbered inhabitants struggled to survive from the small sized fertile patches of land, livestock-farming and from some small-time mining. Around the 70s though the island entered into a new era since it became more and more popular as a hot tourist holiday destination amongst the young European travellers. Today Ios holds its reputation high as a holiday spot for young people who want to have fun, has great tourist infrustructure, a well organized marina and a more than well-structured road network. All those elements place Ios Island at a very promising position for this new age.

As a traditional island in cycladic complex, Ios has many churches. Some of them are built in impressive locations. The view from those locations is absolutely breathtaking. It’s worth hiking few hundred meters to get there.

Local tradition says that the number of churches is 365, as the days of one year, a number that in the late 1960s greatly reduced, since that “most of them are voulismenes (destroyed) dilapidated or their traces are lost “.
The majority of family churches, built of stone and clay and destined, through the namesake saint, to protect the animals and the land of each family from the “evil eye”, were scattered throughout the island.
The churches of Ios are adorned with precious pictures, works of famous painters, like Michail Damaskinos and Ioannis Skordilis, who in the 17th century persecuted by the Turkish knife, fled to the islands of the Aegean. The sanctuary of small churches ia used as an ossuary. Also, some churches were part of the countryside monasteries, such as Aghios Ioannis at Pyrgos and Panaghia at Palaeokastro.
Aghia Irini at the entrance of the Port, Aghia Theodoti at the homonym place, Panaghia at the Palaeokastro settlement as well as Aghios Ioannis at Kalamos and Psathi are considered the biggest churches outside the settlement.
Within the limits of the basic settlement are twenty-two churches.
The architectural style that prevails in the town of Ios, is the “Basilica dome”, a style widely used in the East and in the West since the time of Constantine the Great until the time of Justinian. The name and style came from the common style of the Roman basilicas galleries, served as courts and forums. Some churches in Chora and the outskirts, and almost all the country churches, have the same “Basilica” style.

Morphologically we can divide the churches of Ios in three categories:

1. Rectangles shapes with no curve, no dome, no uplift, but with a great measure of humility and simplicity that works so it shall submit believers in the environment of the cave of Bethlehem.
2. The single-aisled churches, the most widely used inside and outside Chora. But there are some two-aisled.
3. Byzantine ones, with dome and cross.
The natives’ hospitality at their fests is unique, offering traditional local foods and delicacies. In every fest, the visitor may taste different recipes based on meat, which are cooked traditionally, at the event place, in a way that only the locals know. In all of the island’s fests, the fun begins with Greek island music and dance. Simultaneously, various traditional events, such as fires and spicy lyrics, are taking place , accompanying Klidonas.
More specifically, on June 24 we celebrate Saint John Klidonas at Pyrgos, on August 15 the Assumption of Virgin Mary at Gremiotissa at Chora, on August 29 Saint John Kalamos and Saint John of Psathi, and on September 8 the Birth of the Virgin Mary, at Aghia Theodoti and Paleokastro. There are also the smaller fests of Aghia Varvara, of Mersinia, of Saint George at Vourlidakia and Saint Vlassis, but not lacking in anything from the big fests. 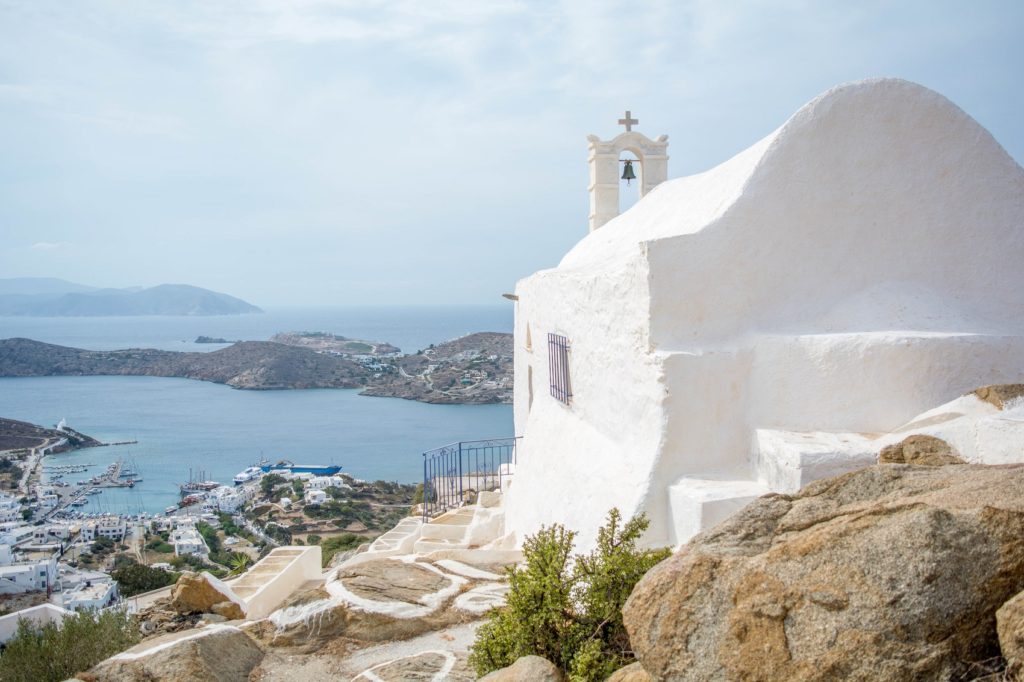 Login to Ios Hotels
Reset Password
Enter the username or e-mail you used in your profile. A password reset link will be sent to you by email.